FRISCO, TX — The Texas Legends (4-1) hosted the Phoenix Suns affiliate, the Bakersfield Jam (3-3), in their third home game of the season.  The two teams met in the season opener where the Legends overcame a 20-point deficit to hand the Jam their first loss.  The Legends followed that blueprint, implementing halftime adjustments that ended in a 105-94 victory at home.

The Legends got off to a cold start in the first quarter, missing every shot from outside and going down by as many as 11.  Eric Griffin and Justin Jackson knocked down 3 blocks each and Booker Woodfox put up a 10-point performance in the first half, but the team was fighting a disadvantage heading into the locker room.

Halftime adjustments proved to be beneficial for the Legends and the battle for control began.  A spark from outside helped the Legends lift off in the second half, rising from 23% to 50% from long-range.  Doron Lamb, Ricky Ledo and Renaldo Balkman each hit double-digits and Griffin refused another 5 shots from the Jam to outscore Bakersfield 57-42 and swipe a victory.

Griffin blocked a franchise-high 8 shots while adding 14 points and grabbing 7 boards.  Lamb led the Legends in scoring with 20 points, 6 rebounds and 4 assists, while Balkman came off the bench to tally the Legends’ only double-double of 17 points, 12 rebounds.

Earl Barron led all scorers with 24 and 12 rebounds off the bench for the Jam.

For more information on the team or the full season schedule call 214-469-0822 or visit www.TexLegends.com. 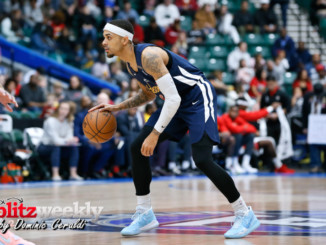 Legends win their 16th game of the season.