An important AFC divisional game takes place this Sunday between two teams that share a weird history of sorts. Prior to moving to Nashville, the Titans were the Tennessee Oilers and prior to that they were the Houston Oilers. The Oilers were a charter member of the AFL and won two championships (1960 & 1961). When the franchise moved they retained their history and records which were officially retired by former NFL commissioner Paul Tagliabue. By 2002 Houston was awarded a new franchise and as a result the Houston Texans were born.

Enough with history, let’s get down to the meat of the preview. The Tennessee Titans head coach announced on Thursday that Zach Mettenberger will start on Sunday. The third string, sixth-round pick out of LSU had this to say: “This is going to be my first game, so really I just got to get the ball out of my hands quick, avoid turnovers and put the ball in the (hands of) guys who can make plays for us. Really that’s the biggest thing a young guy’s got to do.”

Mettenberger will have to abide by his own words since he’ll have to deal with a cantankerous J.J. Watt of the Houston Texans. Watt has been all-world-everything this season and the Texans still have a losing record in spite of his efforts. Mettenberger will have to rely on his backs and receivers to help lighten the load. Speaking of backs, Shonn Greene was arrested on Friday night for failure to stop/halt/frisk, driving on a suspended license, reckless driving and illegal parking, according to Franklin, Tennessee, police.

Getting back to the Texans defense, Watt should have the services of Jadeveon Clowney against the Titans. Clowney could be just enough to get the Texans fired up to become aggressive on defense and improve overall team morale.  The Texans are looking for any reason since newly acquired QB Ryan Fitzpatrick who has been serviceable hasn’t been an inspiration of any sort. Fitzpatrick was the Titans helmsman last season and helped them end a three-game losing streak in the series in a Week 17 win.

Prediction: Since I have to provide one, I predict that Clowney ignites this team in many ways and the Texans thoroughly dominate the Titans in this one. Expect a score of 20-7 when the final whistle blows.

Still on Top This Week 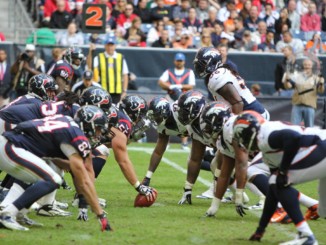