The Houston Texans (3-3) will try to rebound from back-to-back losses against the Dallas Cowboys and Indianapolis Colts when they visit Heinz Field to take on the Pittsburgh Steelers (3-3) on Monday Night Football.

The Texans fought back in both games after being down early, only to come up short at the end, while the Steelers were soundly beaten by the Cleveland Browns. It was only the second loss in 20 games against Cleveland for Steelers quarterback Ben Roethlisberger, who went 21 of 42 for 228 yards and one TD and one interception.

“We failed in all three phases,” coach Mike Tomlin said after the loss to the Browns. “We got to play better. We got to swallow this one and we will.”

As for the Texans and the Colts, Indianapolis led 24-0 after one quarter but allowed Houston to cut it to 33-28 early in the fourth quarter following J.J. Watt’s fumble return for a touchdown. While the Texans had a chance at the end, Bjoern Werner sacked Houston quarterback Ryan Fitzpatrick and stripped the ball, and D’Qwell Jackson recovered to effectively end the game. The Texans defense would surrender 370 yards passing and three touchdowns to Colts quarterback Andrew Luck, including a career-high 223 yards receiving and a touchdown for T.Y. Hilton.

“You give a team a 24-point lead right out the gate, you’re going to have a difficult time,” Watt said.

Of note for Texans fans, according to ESPN’s Tania Ganguli, rookie linebacker Jadeveon Clowney returned to practice Friday for the first time since undergoing arthroscopic knee surgery on Sept. 8 for a torn meniscus. The surgery came the day after he was injured in the first half of the Texans’ season opener against the Washington Redskins.

PREDICTION
The Texans will bounce back in their second consecutive game in front of a national television audience and defeat the Steelers, 21-10. 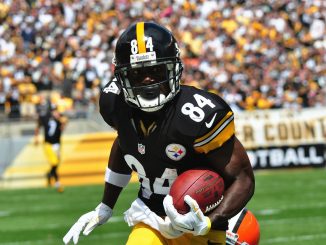