Who’s got the advantage?
When SMU has the ball: A short week presents unique preparation challenges, but it also allows the team to keep some of the momentum from the previous game that little bit fresher. The Mustangs weren’t bad in their fight against the Golden Hurricane of Tulsa on Halloween. Matt Davis could have looked better, but didn’t play so bad as to pin the loss on him. He can play better, and I’ll assume that he will. After the game that he had, Courtland Sutton is starting to raise some serious national attention to himself. While watching him against Tulsa, I called him a football demon, and he just goes out there and plays his game. He’s such a huge target, there isn’t much that a defender can do against him. The Mustangs have got to get back to converting third downs on the ground, like at the beginning of the season. The Temple Owls came out of the gate against Penn State, and shocked the world with their win, because they didn’t just beat Penn State, they destroyed them. Sacking the quarterback is a massive facet of the defensive game. They didn’t get to the Notre Dame quarterback, but the game before, against East Carolina, the Owls had six players with a sack, so that should paint a picture of how the Owls are going to throw themselves at the SMU offensive line from all directions. Both of the Temple starting cornerbacks are sub six foot tall, so they’ll have to outwork Sutton to get him off his game. ADVANTAGE: TEMPLE – The Temple pass rush is stronger than SMU offensive line.

When Temple has the ball: Like the Mustangs’ offense, the defense didn’t play bad, despite the 40 points on the sheet. A pick six, a muffed punt, and a pair of reviewed goal line stands. That’s what torpedoed the Mustangs on Halloween. The Mustangs are getting their pass rush to get some affect on the opposing quarterback, from their front four. The linebackers played an up and down game, allowing some plays to happen, taking some plays away. The defensive backs weren’t too bad, holding Keyarris Garrett to just four catches for 26 yards. The Mustangs’ David Johnson had four pass breakups and was really playing with a lot of confidence. Johnson and Horace Richardson (if he’s healthy) won’t have to worry about keying on one particular receiver, because the Owls spread the ball around pretty well. The senior Robby Anderson collects the touchdowns from PJ Walker. Walker isn’t tasked to do much, just not mess it up. The offense has been on the back of running back, Jahad Thomas, who looks like a Mustang running back, five foot ten and 180 pounds.
ADVANTAGE: TEMPLE – The rushing from Temple is not great for the Mustangs’ poor tackling.

What will it take for the Mustangs to win?
Seriously, the Mustangs need to be a plus two in the turnover margin to have an actual chance at a major upset and the Mustangs first conference win of the season. 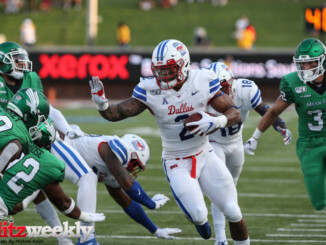