When playing back the game that was West Virginia one week ago there were a lot of things the Horned Frogs (1-5, 3-6 Big 12) did to perfection in the first half save for a deflection and a three play drive for a touchdown.

He also was instrumental in leading the Frogs to an overtime which was lost on a costly holding call that pushed back TCU out of field goal range.

This despite Jaden Oberkrom nearly making a 62-yard field goal that was wide left. This gets mention due to the anniversary of Tom Dempsey being the first to hit a 63-yarder in Louisiana.

Gary Patterson was upset that the game was given away. Jason Verrett was unhappy with another game not closed out. Casey was quick to place the blame on his shoulders on two painful interceptions in a 30-27 loss.

It took nine games but the offense was up and running from the outset. TCU will try to do the same in Ames when taking on the Iowa State Cyclones (1-7, 0-5 Big 12). Take away last year’s visit to Ft. Worth the last time TCU visited Iowa State was 1998 when Gary Patterson was defensive coordinator. That game was won by the Frogs 31-21.

Coming into Saturday’s game, Gary Patterson deals with the first three game losing streak in his time at TCU. Last year the Cyclones ended a 12 game skid against the Big 12 when winning on the road in Ft. Worth 37-23. Prior to that go back to a 2005 Houston Bowl meeting that TCU won dramatically 27-24.

Iowa State Coach Paul Rhoads now in his 5th year at the Cyclone helm has a 25-34 record. Sam Richardson will lead the team at quarterback with 11 touchdowns and seven interceptions averaging 173 yards a game and a 50% pass completion ratio (110 for 217). Richardson a Trevone Boykin threat to run the ball with 331 yards on the ground. Aaron Wimberly will take the majority of the handoffs. In 2013 Wimberly has 388 yards and two touchdowns with a rushing average of a little under five yards per carry.

Quenton Bundrage the primary receiver with 30 catches, 455 yards and six scores. Jeremiah George and Jacques Washington will be the main threat to disrupting the play-calling of Casey Pachal, The two have a combined 170 tackles  this fall with 11 tackles for a loss.

The Horned Frogs come into Iowa with a 119-42 record in the last 13 years. Since 2009 TCU has a 20-5 record when playing on the road. Last week against the Mountaineers it appeared that the running game with Trevone Boykin and BJ Catalon showed signs of life. In addition Trevone Boykin is the only running back to have had a 200 yard passing game while being one of six players to have had a 100 yard game rushing and passing.

Heading into Week 10 Gary Patterson had a lot on his mind when handling his weekly press conference duties Tuesday in Ft. Worth:

Some thoughts on your first visit to Ames, Iowa since 1998?
“We’ve got game 10. We’re obviously not in a place where we’d like to be at this time of year. This hasn’t been a place where we’ve been in awhile, but we have opportunities to win three ballgames. It’s kind of a similar situation to Iowa State. Both of us have been banged up. A lot of different people have been out. At this time of year, you get a chance to play for pride. We have the next two games on the road and a lot of work to do.”

Not since 2001 have you needed to rally the team so to speak for a strong finish if you have Bowl aspirations. Is this a slippery slope for you?
“One of the things is that we got stronger at the end of that year. The difference here is that we’re more banged up, but you have to get ready to go. One thing that I draw from is how good a practice we had on Sunday. Kids bounce back. They wondered how we were going to approach it, and it’s like we always have. You just keep climbing the mountain, get better and go do it. We had a good practice on Sunday, and I expect to have a good one today.”

Can you comment further on the intensity or the success of Sunday’s practice?
“I think it shows what kind of people we have and what type of kids are on this team. We’re not as old as we need to be senior-wise. We only have six or seven seniors playing, but it shows we have a lot of kids who like playing the game. Kids who like the game get ready every Saturday. They were a little bit down from the Texas loss going into the West Virginia game, but I thought there was more attention to detail Sunday than there was the previous week.”

Despite the overtime loss to West Virginia was that the best performance of the year by your wide receivers?
“I don’t know that. I tell people that Trevone (Boykin) would be a lot better quarterback if he was throwing to Trevone. We’ve been saying we needed a go-to guy, and there were a couple guys who made plays. Casey (Pachall) looked to (Trevone), and he went up and made plays with people all over him. That is what someone, who you would say is your go-to guy, is supposed to be like and he was able to get that done. I was excited. Casey was really a true soldier because he took some big-time hits and made some plays. He gave us an opportunity and a chance to win. We went down the field, scored and had some nice plays by Josh Doctson, David Porter and LaDarius Brown. They were guys who made plays that give you a chance. That is what you’re looking for. You want people who will give you a chance. Casey got the ball out of his hands as quick as we’d seen him do it in a long time, which is what you need to do when people are blitzing you and doing all that stuff.”

Is there anything out of the ordinary you try to convey to your team about the urgency of the final three games?
“If Sunday was any indication, they’ll be great. If you’re not inside the walls of a football program, then you don’t really know what makes it tick. You don’t really know what is wrong. All you can do is judge it off a Saturday and anything you read in the paper. I’ve been saying since the beginning that we’re young. You lose some players that we lost early, like a Devonte (Fields), and this group could have quit a long time ago. One of the things is that this group likes to play. They have a lot of pride, and there is a lot of history. As I told them, you have two ways of looking at it. You can look at it like our chance is not very good, and I told them the odds are not in your favor to win three more. To be honest with you, that is what we are going to try and do. As I told somebody yesterday, without bad luck I’m not sure we’ve had any luck at all the last couple seasons. We’ve got an opportunity. If you look at the other side of it, the success stories of how James Dunbar has turned himself around, how Casey Pachall has turned himself around and the amount of young guys who are growing up and becoming players are definitely big positives.”

Have you ever had a player like a Trevone Boykin since your arrival?
“No. I’ve never had one who could move over to receiver and do that. Fortunately for us, he played some of that in two-a-days with Casey. He is too good a player and too good of an athlete to leave on the sidelines if one guy is playing quarterback. He has prepared to be a wide receiver. He likes being on the field and not standing on the sidelines. It is definitely a big positive for us and will be a big positive going forward. I think it does show that when you can get a guy who can do that within our offense, like (Josh) Boyce last year, you can move the football. You just can’t turn the ball over. It becomes a simple thing. Four or five turnovers is how you get yourself in a situation that we were in the other day. One of the things you have is that the kids are excited. You want to make it as upbeat as you can, but you still have to understand that winning is hard. I tell them all the time. In this day and age, winning is hard. You have to be able to find ways to do it, grow up and do it as a team. We’ve been very close this season and close doesn’t count.”

With all that said it is this writers humble gut feeling opinion that Saturday there will be a whirlwind of activity on the ground and in the air when TCU picks up from where they left off last week in the first half. Power football, time of possession, less than five penalties, no turnovers and the only sight or sound heard from Iowa State will be the unconfirmed rumor of a waterspout sighting north of Ames. Jack Trice Stadium will have 55,000 fans silenced early which leads to my featured storyline on Sunday. 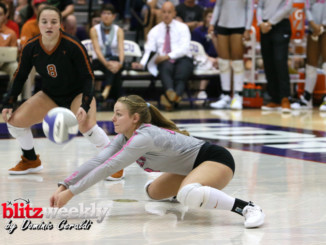