Sophomore wide receiver Jalen Reagor had over 200 yards of offense and two touchdowns to lead the TCU football team to a 31-24 win over Oklahoma State Saturday at Amon G. Carter Stadium. The senior night victory gave the Horned Frogs win No. 6 on the season and made them bowl eligible.

Reagor rushed for a career-high 121 yards and one touchdown on just four attempts. He had 91 yards on eight receptions and a touchdown receiving. Quarterback Grayson Muehlstein made his first career start and was one of 22 seniors to play their final home game. The Decatur, Texas, native finished 16-of-25 for 180 yards and two touchdowns.

The Cowboys got on the board first on a 39-yard field goal, but the Horned Frogs scored the game’s first touchdown. Reagor’s 6-yard touchdown reception from Muehlstein put him over 1,000 yards receiving for his career and capped a 9-play 67-yard drive.

The sophomore became the youngest player in school history to reach the 1,000-yard receiving mark in a season and joins Josh Doctson and Reggie Harrell as the only TCU players in the 1,000-yard club. The score came with just over a minute remaining in the half as TCU led 7-3 at the break.

On the game’s first play of the second half, a dropped backwards pass by Oklahoma State’s Chuba Hubbard was picked up and scored by TCU senior linebacker Jawuan Johnson to put TCU up, 14-3.

The Horned Frogs’ first offensive play of the half resulted in the same as the first defensive play, a touchdown. Reagor rushed for 83 yards for the score to put TCU ahead 21-3 with 13:47 remaining in the quarter.

After a 26-yard Jonathan Song field goal extended the Horned Frogs’ lead, the Cowboys scored consecutive rushing touchdowns to bring the game to within one score, 24-17, with 10:04 to play.

A 24-yard touchdown pass from Muehlstein to freshmen wide receiver Derius Davis put TCU ahead 31-17 with over six minutes on the clock. It was a needed score as the Cowboys came right back with a touchdown to get within 31-24.

The TCU defense, which entered the game ranked first in the Big 12 in several categories, sealed the win. The Horned Frogs forced a 4-and-out with two minutes left to play as Vernon Scott broke up the fourth-down pass attempt. 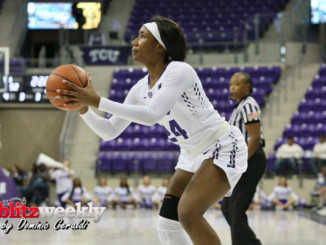 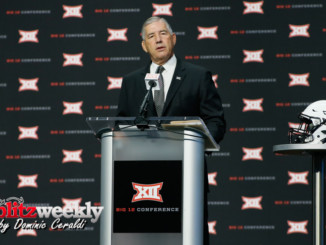