After having four days off to fix the glaring issues that have been plaguing the team, the Dallas Stars returned to the ice at home against the Calgary Flames last Thursday to see if those issues had been resolved. The Stars quickly jumped on the Flames thanks to a goal scored by rookie-sensation Alex Chiasson to put the Stars up, 1-0, early in the first period. After forward Lee Stempniak of the Flames tied the score early in the second period, the Stars completely took control of the game. Captain Jamie Benn would score two of the next four goals for the Stars as they would go on to hammer the Flames, 5-1, and improve their home record to 3-1-0. Defensively, they were much better as they held the Flames to 29 shots with goalie Kari Lehtonen stopping 28 of them. This was Lehtonen’s first game back from a lower-body injury after missing the previous five games. It did not look like he missed a beat as he was tremendous.

After the game, Benn talked about how big of a win this was for the team. “I thought it was a good game by our team,” Benn said. “After a tough road trip, we wanted to come out here and be strong at home with a good start. I thought our goalie played great tonight and we got a big two points,” as he continued. There was one major move that was made before the game as defensemen Alex Goligoski was scratched because of his poor play by head coach Lindy Ruff. In his place was defensemen Kevin Connauton made his NHL debut. The 23-year old was solid in his sixteen minutes of play. He had four blocked shots, two hits and was a +2. Ruff was pleased by his performance. “He was okay in his first game,” Ruff said. “Maybe a little nervous in the first period, but I thought he settled in and that pair was pretty efficient after that. I thought Kevin started to use his legs a little bit and felt better about his game as the game went on,” as he continued.

Unfortunately, the Stars could not follow up their success against the Flames two nights later at home against the Winnipeg Jets as they lost via the shootout, 2-1. Goalie Kari Lehtonen was terrific again stopping 37 of 38 shots, but the Stars could not help him out scoring only one goal. The biggest factor in the loss was the power play. They were 0 for 4 on the job including wasting one in overtime when they had a chance to win the game instead of going to the shootout. After the game, Benn talked about how they need to get the power play working. “We didn’t get the job done. We’re going to have to work on and figure it out because it can make a difference in the game,” Benn said. Ruff would echo the same opinion. “You have to convert those,” Ruff said. “We had a couple of really good opportunities to convert on the power plays, but we didn’t. Handling the puck was not our greatest asset, tonight,” as he continued. The Stars fall to 4-5-1 and remain in last place in the Central Division.

The Stars will try to bounce back when they go on a two-game road trip, starting Monday night when Lindy Ruff returns to Buffalo to face the Sabres, a team he coached for fifteen seasons. They will then travel across the border to play the Montreal Canadiens on Tuesday night, before coming home briefly to play the division-leading Colorado Avalanche. After that, they head back out on the road to play the Ottawa Senators next Sunday afternoon. 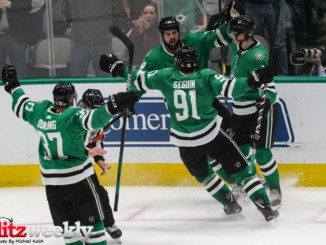 Still Searching for an Indentity