The Dallas Stars had a better week than then the previous one going 2-1-1 as they slowly inch their way up the Western Conference standings in a fight for the last playoff spot. Their one regulation loss this past week came last Monday in Denver against the Colorado Avalanche where they were blown out, 6-2. The second period in this one is where things unraveled for the Stars as they gave up four goals knocking goalie Kari Lehtonen out of the game. “That was pretty much us laying an egg,” Stars captain Jamie Benn said according to NHL.com. “They came out strong and jumped all over us. They’re a good team and they’ve got four pretty good lines. They just keep coming at you and we couldn’t find a way to stop it,” as he continued.

Good news for the Stars is they got another crack at the Avs the following night at home to see if they could finally beat this team for the first time this season. The Stars showed a lot of resilience in this game after trailing twice to come back and win, 3-2. Stars forward Ray Whitney, who had not scored a goal in thirteen games, tallied two goals while rookie forward Colton Sceviour scored the game-winner in the third period. Backup goalie Dan Ellis was superb with 25 saves in the win. After the game, Whitney talked about ending a thirteen-game scoreless streak. “It’s always nice to score especially when you’ve been dry for a while,” Whitney said. “Confidence is a big part of this game and it’s nice to get that one out of the way. Hopefully that will be it (scoreless streak) for the rest of the year,” as he continued. Good for Whitney but even better for the Stars as they get a huge win over a divisional opponent at home especially after losing badly to the same team the night before.

The Stars would continue the momentum from their big win over the Avs as they would pummel a very hot Vancouver Canucks team, 4-1, thanks to a strong bounce back performance from Lehtonen. He was terrific with 27 saves in the win. Stars forward Erik Cole had a goal and two assists with a +3 rating. After the game, he talked about the big win over the Canucks. “We just did a good job of carrying over from our last game at home where we were very tough to play against in our D-zone,” Cole said. “When we come back and work hard as five guys in the D-zone, we’re able to create turnovers and go the other way offensively,” as he continued. With this win, the Stars have their longest winning streak at two games since they won three in a row last month.

The Stars were looking to match that three-game winning when they traveled to San Jose last Saturday night to take on the Sharks. The Stars jumped to a 2-0 lead in the second period before blowing the lead and the game losing in the shootout, 3-2. Despite outshooting the Sharks, 46-39, and winning the faceoff battle, 33-26, they could not seem to get the third goal past Sharks back goalie Alex Stalock. Even worse, the Stars would lose another veteran defenseman to injury. Sergei Gonchar would leave the game after taking a puck to the face in the second period. “He’s all right,” said Stars head coach Lindy Ruff according to dallasnews.com. “He took a puck to the face and isn’t feeling well, so he has to stay out for a while probably,” as he continued. How long? Who knows. The good news, potentially, is that defenseman Aaron Rome could be back for the Los Angeles Kings game on Monday night to take Gonchar’s spot. If not, they could call up recently signed defenseman Maxime Fortunus from Cedar Park. 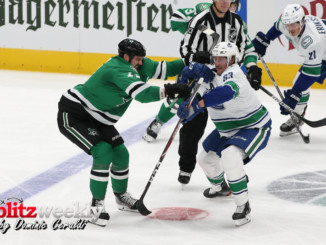