Moments after the glow of a win, maybe their best win of the season Lindy Ruff stood at the podium and I posed the question if there was any concern about a letdown when the Colorado Avalanche came to visit Monday night.

“We just want to live in the moment. I’m not going to concern myself with what happened yesterday or what could happen tomorrow. I’m just focused on the here and now. That’s it.”

Even so one can’t help but wonder if the probability of a letdown was going to happen by virtue of the laws of karma….or just a lucky bounce.

Such was the case on Monday night as two teams playing good hockey would meet up at the American Airlines Center. The Colorado Avalanche (32-14-5) came into Dallas with a 6-3-1 record in their last ten games. Goalie Semyon Varlamov a perfect 3-0-0 against the Dallas Stars with a GAA of 1.88

Dallas fresh off a 14-1 run on Minnesota, Toronto, and Pittsburgh and a 4-5-1 record in their last ten with Kari Lehtonen at goal. Two shutouts in three games and two shutouts in addition. Maybe it was as simple as the arctic wind that blew through by way of Colorado that knocked the mercury down 40 degrees in less than a few hours.

This was not going to be the Dallas Stars night.

Nathan Mackinnon took all of 100 seconds to put Colorado on the board first with a backhanded blast-his 18th of the season-to place the Avalanche on a 1-0 tilt. The lead would increase to 2-0 at 15:57 when Jamie McGinn lit the Mile High Lamp to give Colorado a 2-0 lead (his 12th). Give assists to Maxine Talbot (11) and Tyson Barrie (10) for the first, Ryan O’Reilly (17) and Matt Duchene (27) on the second.

Jamie Benn would then get Dallas on the board at 17:27 of the first period with his 20th goal of the season aided by assist #28 by Tyler Seguin. 2-1 your score after the first period…

The Stars began the second period on the power play. Something they have been really good at of late making 9 of 24. Sure enough at 1:02 Tyler Seguin would make a power play goal for the Stars-his 22nd-assisted by Jamie Benn (28) and Alex Goligoski (21). 10 for 25 with the extra man and a tie game after 21 minutes.

There the score would remain until 17:57 of the second when Paul Stastny backhanded a 15th goal past Kari Lehtonen on the power play. The first time in 16 tries a penalty wasn’t killed by Team Ruff. Assist Gabriel Landeskog (25). Colorado 3-2.

The following will be a source of frustration when reviewing the tape. Dallas outshot Colorado 12-10 in the first, 19-8 in the second and 13-3 in the third. A 44-21 advantage that didn’t add up to victory for Lindy Ruff’s group this night.

Alex Tanguay’s fourth goal of the season at 4:13 was your game winner aided by Landeskog and Talbot (two assists for each, 26 and 12 respectively) despite numerous scoring chances by the Dallas Stars.

With the NJ Devils on the horizon on the 30th to close out the month of January (4-9-1 in case you’re counting) suffice to say this was not the start to the year Lindy Ruff was hoping for.

“Tough one. We had a couple of great opportunities late and we couldn’t get it to go. We had five or six point blank chances and he (Semyon Varlamov) was there and made some saves.” Ruff lamented.

Tyler Seguin offered a perspective different from the last three games when asked about a slow start.

“I think we just woke up a little bit. The last few games we came out flying every game. They got the first one and…I don’t think we were ready to play we were still a little sluggish. I felt we outshot and outskated them and they got that last goal that bounced off the skate of our guy (Sergei Gonchar).”

Back to the drawing board for the Dallas Stars. Blame it on the cold nasty weather only allowing 11,678 fans to come out and watch. It too came from Colorado.

Bulldogs Show Why They Are #9 in the Country 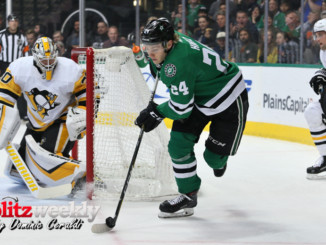 Penguins down Stars 3-2 at the AAC 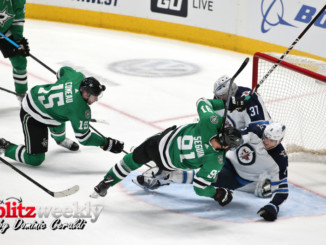