Reasons to Watch
One word… offense. The Hilltoppers senior gunslinger, Brandon Doughty had a pretty historic year at Western Kentucky. He completed 67.5% of his pass attempts for 4344 yards, 44 touchdowns and only 10 interceptions. He led one of the most prolific offenses in the FBS. His laundry list of offensive accomplishments was topped off by his eight touchdown, two interception effort against 24th ranked Marshall in WKU’s last game of the season. The Hilltoppers offense could not be stopped as they sent the Thundering Herd to their first loss of the season.

The other quarterback, sophomore Cooper Rush is much less dynamic but no less important than Doughty. Rush has completed 63.8% of his passes, for 2664, 20 touchdowns, and 12 interceptions. One main thing that has really plagued this guy has been sacks. His offensive line, and poor decision making helped him being sacked 24 times. The team goes as the quarterback goes. If he can manage to limit his mistakes the Hilltoppers defense will definitely keep the Chippewas in the game.

Western Kentucky Hilltoppers
The Hilltoppers will look to move the ball through the air. They rank third in the nation gaining 365 pass yards a game. They also have a pretty good feature back in the backfield named Leon Allen who has gained more than 1400 yards this on the ground this season. Wide receivers Taywan Taylor and Jared Dangerfield could have the Chippewa secondary in trouble all game. WKU does not really have a great defense so the Hilltoppers will look to Doughty’s arm to make the difference like he has all season long.

Central Michigan Chippewas
Central Michigan can struggle at times to score. They can move the football pretty well at times thanks to an offense that has a capable quarterback and decent running back. Senior Thomas Rawls has gained over 1100 yards on the ground and will look to gash a Hilltopper defense that allows a boat load of yards and points.

Prediction
Simply put, the Chippewas won’t be able to hang in this race for the inaugural Bahamas Bowl. In the end I predict WKU Hilltoppers 48 – Central Michigan Chippewas 28 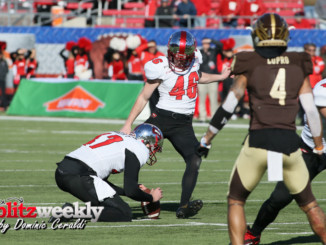