The Mustangs started the game with the ball, and would trickle the ball 75 yards down the field in 13 plays, where Garrett Gilbert would run the ball in from three yards out, and the offense as a whole, looked very sharp on the ground, and through the air. And with the Mustangs first opportunity on defense, they’d show some strong play, with Kenneth Acker making a great tackle on third down, and the Bearcats would decide to go for it on fourth down, and with great coverage downfield, linebacker Jonathan Yenga was able to go, almost coast-to-coast along the field to track down Brendon Kay for the fourth down sack.

On the Bearcats next drive, they would move the ball pretty well, and then they tucked themselves into a bad situation, and then made a bad decision which cost them. On 3rd and 25, the Bearcats would throw the ball, and Ajee Montes would grab his first career interception. And the Mustangs would throttle up, with Gilbert hitting Darius Joseph for 45 yards off of miss-matched coverage to set up shop just outside the end zone. But a hot pass intended for Jeremy Johnson, which he had a good chance at, missed on 3rd and goal, and had the Mustangs settling for three points on a great drive.

The Bearcats would end their drought, and find the end zone, capping a 7 play, 75 yard drive, with a nice roll right play, where Kay found a waiting Chris Moore in the end zone for the touchdown. The Bearcats forced the Mustangs to punt the ball, which wasn’t a pretty one, and then go on top with a single play. Kay found Mekale McKay for a 62-yard strike, and the 14 to 10 lead. The kick return following the score was horribly negative for SMU, as JaBryce Taylor stumbled and as he was falling, his helmet was turned slightly by a Bearcats’ player, then another Bearcat was in position by his head, and contact between the player’s knee and Taylor’s helmet, left him immobilized on the field, it was a perfect storm of events. Never a welcome sight to a game is the stretcher, but that was how Taylor left the stadium.

The Mustangs and Bearcats would exchange punts following the long delay, and then the Mustangs had a great opportunity to take a lead into halftime. With 1:10 left in the half, on 3rd and 8 from the Bearcats’ 11 yard line, and Garrett Gilbert would escape the pocket and run the ball in for the touchdown, but a bad holding penalty ripped the touchdown from SMU, and to worsen the situation, the Mustangs would not get any points, as they doinked a field goal off the right up-right, giving them no points and little momentum heading in at halftime.

The Bearcats would move the ball with ease on the opening drive of the second half, as Kay would trickle the ball downfield, and once they were in the redzone, in comes Jordan Luallen, a change-of-pace quarterback, for the 2-yard touchdown run. Then an on-side kick would be recovered by Cincinnati, but the next play, Kenneth Acker makes the interception to get the ball back for the Mustangs’ offense. But get nothing but a sweet quick-kick from Garrett Gilbert and the offense. Following the quick-kick, the Bearcats offense would slow things down, and seriously milk the clock, and soak up yards, going on a 17 play drive, driving 96 yards and juicing the clock for a little over 8 minutes with a solid commitment to the run, capping with a 7-yard Tion Green touchdown run. The Mustangs’ offense would answer quickly, with a 74-yard pass play from Gilbert to Keenan Holman to get them down to the 18 yard line. And five plays later, on 4th and goal from the 5 yard line, Gilbert was able to move around and find Darius Joseph for the game-tightening touchdown.

The Bearcats would take the ball, and just keep sliding down the field, chewing on the clock, until a first down of about ten yards, turned frowns upside down on SMU, as Zach Wood laid the wood on Tion Green, who fumbled the ball and Jay Scott recovered at the 10 yard line of SMU, and after grinding a little over 6 minutes off of the clock and getting into dangerous territory, the Mustangs defense came up with a great stop.

The Mustangs deployed, quite possibly the calmest, need-to-score offense ever. Going on a 15 play, 90 yard drive, which ended with a beauty of an off-balanced 4-yard pass from Gilbert to Joseph, then a gut check 2-yard run by a stretching Garrett Gilbert to convert on the 2 point play, to bring the game within 3 points.

Have you ever been in the situation when someone you know misplaces something, makes a HUGE deal about it, starts to attack YOU, then finds it rather easily. Well, in a way, that happened during the final fourth quarter kick recovery situation. The penalty was targeting, which is a 15-yard offense and a player ejection, but it can be reviewed so that the player can return to the game. And when it’s proven that it wasn’t an illegal hit, the flag is kind of a lot of pointless noise, but the yards are still penalized even though, no penalty was committed. And at that point in the game, with SMU, not possessing the ball, and with a chance to stop Cincinnati, those 15 yards are kind of like a “sorry, kids, tough break”. And it ultimately ruined the game for SMU, as the Bearcats milked the clock all the way down.

Sure the Mustangs didn’t have to kick the onside kick, and yes, they should have stopped them, with 3:29 left and three timeouts, they should have been able to get the ball back to the offense. And looking back through-out the game, missing two field goals was the difference maker in the final outcome. The Bearcats would convert on 4th and inches with a quarterback sneak, and send the Mustangs home with a 3-5 record, 2-2 within the American Athletic Conference. 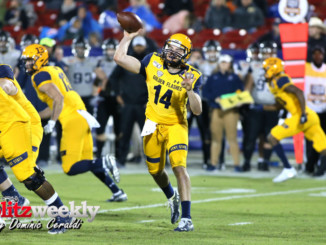