The Baylor Bears are coming off their second bye in four weeks having moved up four spots after beating the Sooners while remaining seventh in Tuesday’s playoff rankings.

Baylor coach Art Briles understands that the only way to ensure a spot in the first College Football Playoff is to keep stringing wins together down the stretch.

The defending conference champions begin their final push one-half game behind league-leading and No. 5 TCU (6-1), which lost at Baylor on Oct. 11, and tied with No. 12 Kansas State (5-1), which visits Dec. 6.

After throwing for a career-high 510 yards with six touchdowns and two interceptions against the Horned Frogs, Baylor quarterback Bryce Petty has an average of 295.7 passing yards with six scores and no picks over his last three games.

The senior completed 28 of 48 passes for 359 yards with two touchdowns in his only career meeting with Oklahoma State, a 49-17 loss in Stillwater.

“Each week, we have to go and prove ourselves,” quarterback Bryce Petty said. “You can’t get into the playoffs if you don’t win, so these next three games are huge for us.”

“You can come up on them and try to stop them in the flats, but then they’ll throw it over your head,” Oklahoma State head coach Mike Gundy said. “If you stay off of them, they’ll throw it in the flat. If you throw too many people back in coverage, they’ll try to run the ball on you.”

Baylor has been especially good in the turnover department, winning the battle in each of the last three games (WVU, 3-0; KU, 3-0; OU, 1-0). The Bears have not surrendered a turnover since an interception with 11:38 left in the fourth quarter versus TCU on Oct. 11

I predict Baylor will add another victory by exploiting Oklahoma State’s weak defense and stop their hot and cold offense. 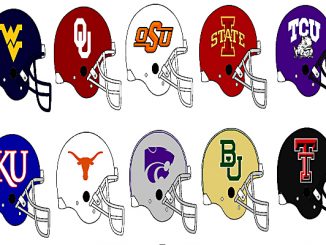