Twin Peaks held its annual National Contest in front of a packed house at the Bomb Factory in Deep Ellum and the big winner of the evening was Lexe from Scottsdale who left the stage as Miss Twin Peaks 2018.

All 82 of Twin Peaks restaurants had a representative on hand for the contest that featured multiple rounds in bikinis and costumes on the runway before a cut to the top 10 finalists.

“I’ve done pageants for 18 years prior to this, so I felt confident going in,” Lexe said. “But at the same time, I came here simply to have fun and I genuinely did not think I would actually win. I had never done any type of bikini contest before, pageants are very different than this, but it was a lot of fun.”

The emcees for the evening were Chase McNary from season 12 of The Bachelorette and Janelle Brandom, formerly of WFAA Channel 8’s Daybreak and they conducted the Q&A portion of the evening with the finalists.

“The Q&A was the most nerve-wracking part of the night,” Lexe said. “It’s easy to throw on a bikini when you’ve been on a strict diet of grilled chicken and broccoli for a month, but you want to sound like you’re not super nervous and get across the cohesive thoughts to the judges and the crowd in a complete sentence.”

Mandy from Addison was first runner-up and Zahra from Fort Meyers was second runner-up.

The highlight of the evening occurred when Twin Peaks presented Folds of Honor with a $405,000 check provide educational scholarships to spouses & children of America’s fallen and disabled service members.

The Twin Peaks girls were actually in the Dallas area for several days doing rehearsals, promotional photo shoots and a vendor show (which included its own runway show).

“I felt super important the entire weekend and I know the other girls did too,” Lexe added. “They made us feel like VIPs the whole time we were here in Dallas and it’s certainly a week that I’ll never forget.”

Fans who weren’t able to be in Dallas for the show could watch the National Contest at their local Twin Peaks to cheer on their favorite contestant while enjoying a signature ice cold 29-degree draft beer and made from scratch food.

Following Lexe’s crowing, Big & Rich was on hand to perform in concert. 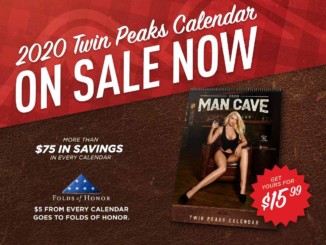 Step Inside the Twin Peaks Man Cave with 2020 Calendar