Who do the Cowboys need to shut down?
DE J.J. Watt – I don’t know if anyone has heard of this Watt, but he’s a couple of seasons away from being a real player. OR, he’s an absolute tyrant on the football field, is currently the baddest man on defense in the NFL, and has the ability to make coaches over-prepare for him. Watt is free flow end, and moves along the offensive line, seeking out weaknesses to exploit. Doug Free is likely going to get a heavy dose of 99.

Who on the Cowboys, needs to step up?
DL Tyrone Crawford – Watching the Saints game, there were flashes of what Crawford can really bring. He bull rushed Jahri Evans right into Brees’ lap, and Evans is considered a top guard in the league. And on another play, he went across the line, from left guard Ben Grubbs, then onto Jonathan Goodwin, and finally to Evans, then he batted the ball down. That’s a player, but with Melton likely returning to heavier role in the defensive line rotation, Crawford could be let off the chain to go after Ryan Fitzpatrick behind an under-performing offensive line.

Which group will give the Cowboys fits?
The Texans wide receivers – Last week, the Texans got almost nothing out of their running game, in fact, Tony Romo out-rushed the Texans running backs, so they went with the New England-style of picking up first downs, the short passing game. The Texans used every player as a pass catcher to pick up first downs, which means the Cowboys will have to man on jams on short third downs situations and have very tight coverage. Second year star DeAndre Hopkins is as good a number two wide receiver as there is in the league, and Andre Johnson might have a new/old quarterback, but he will still gets his.

Which group will give the Texans fits?
The Cowboys running game – Lay-up answer but the Texans rush defense isn’t their best asset, the Texans are 24th in the league against the run. With all of their stud draft picks at linebacker (Cushing, Mercilus, Reed) that they’d be better and keeping running backs in front of them. The Cowboys have moved and cleared lanes for the leading rusher in the NFL, DeMarco Murray, and the best thing is that they haven’t gotten bored with running the ball like in years past and are quite enticed at the notion of slamming the ball on opposing teams.

What will it take for the Cowboys to win?
Don’t change the recipe. It’s worked. It’s continuously effective and against the Texans’ run defense it can work. The Texans are a turnover based defense, and they are very good at, forcing seven fumbles and four interceptions. If Cowboys can protect the ball like they have for the last six quarters, the Cowboys could trot up to Seattle with a 4-1 smile on their collective face. If the defense can make Ryan Fitzpatrick try and hero the game, it’ll likely be similar to the last time Fitzpatrick rolled into AT&T Stadium, a 44-7 win for the Dallas Cowboys.

Prediction: Houston 14 – Dallas 27: Still hung over with Cowboys Kool-aid, I want to predict the Cowboys just roasting the Texans, but I’ll slow it down and just be happy when that happens. Instead, I’ll predict a solid defensive game from both teams, because the Texans are going to gameplan for DeMarco Murray, just as the Cowboys are going to scheme to keep Watt away from plays. I just feel that this Dallas defense has some earned swagger, and want to let it ride. And I really don’t believe in Fitzpatrick. 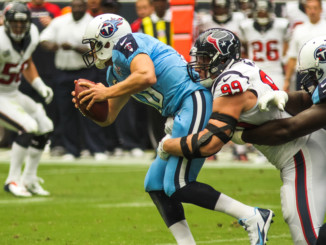