Following their fifth consecutive loss of the season that put the Houston Texans at 2-5 — three games under .500 for the first time in almost three years — are in the midst of their bye week, but it is anything but a week off.

First came the news that Pro Bowl linebacker Brian Cushing is out for the season with a left knee injury that will require surgery. The injury occurred on a low hit by Kansas City Chiefs running back Jamaal Charles. Cushing tore the ACL in his left knee in Week 5 of last season.

“I think he was playing at a defensive player of the year-type of level,” coach Gary Kubiak said, of the linebacker the Texans inked to a six-year contract worth $55.6 million before this season.

In other Texans news, rookies Sam Montgomery, Cierre Wood and Willie Jefferson were all released on Monday after violating team rules at the team hotel in Kansas City. ESPN.com reported that the violation involved marijuana use, but the players have since said they were smoking cigars and no illegal drug use took place.

“I won’t discuss team rules and those type of things,” Kubiak said during his Monday news conference. “I’ll make decisions based on a body of work in everything I do.”

Next up for the Texans is another prime time contest on NBC, this one at home against Andrew Luck and the Indianapolis Colts on Nov. 3.

The Cat Came Back 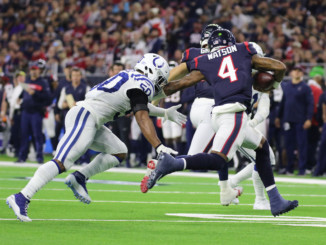