Over the years, I have enjoyed countless genres of music, from suicidal singer-songwriters to stoned purveyors of Slowcore. I’ve often wondered if that means I’m open-minded. Or I need medication for Multiple Personality Disorder.

But, even I draw the line. I hate heavy metal. I hated it in 1969, I hated it in 1983 and I will someday be hating it in the Beth Shalom Home For The Aged. After watching yet another metal show on VH1 Classic, trying to tell us this music has merit, I decided it’s time to explain why I despise this mentally-defective, inbred child of Rock and Roll. And also, that I can’t like a genre that boasts a guitar player named Yngwie Malmsteen. Which I heard is not a man at all. But actually a Scandinavian skin condition. Or, possibly, both.

Lyrics – When I was watching a show about metal, a fan actually was blown away when that syphilitic little dwarf, Bruce Dickinson, sang a song about how white people once came to our country and killed or subdued most Native Americans. Until this song, metal fans apparently never knew this. Next thing, they’ll tell us that Pearl Harbor was once bombed. And we went to war over it!

The Singers – There are two kinds. Those gruff, grunting guys who sound like they just picked up a Volkswagen. And will be in a truss for the next six months. Or the high-voiced fellas, who sound like they are doing tributes to Curly Howard. First of all, Curly was being intentionally funny. Second, how often can these guys afford surgeons who take their testicles out of their throats and put them back where they belong?

Guitarists – They still think faster is better. They also think this about sex. Which is why there are usually fewer women at metal concerts than were recently spotted at Hamlet starring Steven Seagal. Co-starring Jean-Claude Van Damme as Polonius.

Drummers – They use so many drums, roadies must arrive a week before the show to set up the kit.

Concept Albums – When Judas Priest returned with Rob Halford, the group did a concept record about Nostradamus. The record actually was ready three years before it came out. But Halford spent all that time searching for a rhyme for “prognostication.” Finally looked it up. Changed the word to “premonition.” Album was finished in four hours. Sold millions. Somehow Halford made people believe Nostradamus predicted Native  Americans would be slaughtered by whites. Then, refused to share points with Dickinson.

Power Ballads – A sub-genre that is very controversial. Does it rob listeners more of their time or their IQ points? Bret Michaels recently admitted that Every Rose Has Its Thorn was lifted from John Keats. He wants to give his descendants royalties. Keats’ family sues Michaels for defamation. They win. The terms are simple. Michaels owes them nothing. Except, he can’t make this claim, publicly, again. And if he does, he must mow their lawn, weekly, until he’s 70. 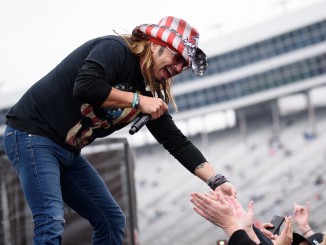 The Moment: Nirvana on SNL