With a move that did not make plenty of headlines, the Warriors signing of Andre Iguodala may just be the biggest news of this NBA’s offseason. “Iggy’s” multifaceted offensive and defensive skills will fit flawlessly on a team that really impressed in last year’s playoffs. The losses of Carl Landry, Jarrett Jack and Brandon Rush will hurt their bench but will also push starters Klay Thompson or Harrison Barnes to that same bench to be that oh so needed designated sixth man.

Without a doubt, Iguodala’s addition to this starting lineup makes it a legitimate championship caliber starting five. While it is true that the Warriors had to get rid of Landry, Jack and Rush in order to get Iggy, I am sure the 6’7 athletic and savvy guard/forward will make it worth their while.

First of all, how about we start by talking about this guys’ ability to defend. At 6’7″ and with a wingspan of 6’11″ this guy is an offensive player’s worst nightmare. He has an unbelievable motor and quick feet that allow to be absolutely relentless defensively. He is extremely versatile as well. He often guards the best player at the one, two, or three position on any team.

His ability to steal the ball and read passing lanes will undoubtedly help the Warriors increase their fast break points as well as their turnover rate. According to realgm.com with Iguodala on the court for the Nuggets last season, Denver limited their opponent to an effective field-goal percentage of 48.7 percent. With him off the court, the number rose to 50.8 percent, a significant 2.1 percent leap. Golden State finished 29th in the league in defensive rating, allowing 109.1 points per 100 possessions on an effective field-goal percentage of 49.6 percent, 23rd in the league.

Even though Mark Jackson has been preaching defense since being named the head coach in 2011, it is rather difficult and maybe unrealistic to believe that the dynamic trey ball shooting duo of Curry and Thompson will improve over night in that aspect of their game. Bringing in someone like Iguodala allows center Andrew Bogut and forward David Lee to worry more about their matchups. It also allows defensively challenged guards (Thompson and Curry) to have those inevitable defensive lapses without worrying that much about it.

Even though Iggy’s defensive prowess is noteworthy, his versatility offensively may be even more impressive. He is the most prolific non-point guard in the game with an assist rate of 26.81. Averaging five assists per game over a nine-year career for a forward is nothing to sneeze at. It is a testament to his ball handling abilities as well as his passing skills.

Not only can Iguodala pass but he can score in a plethora of ways. Driving to the basket, pull up jumpers, coming off screens, and post up moves are all ways in which he can be effective scoring the basketball. Even though he is not that prolific from the 3-point line, the option is still there as he is shooting 33% from the arc over his nine year career.

The bottom line is that this guy contributes in many ways for his team. While he may never be an MVP of the NBA, this team will only go as far as Andre will take them. 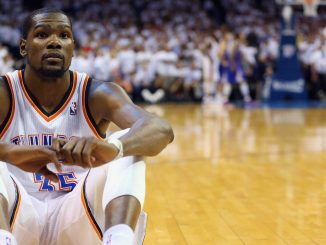