It’s always a treat when you get to partake in something that just screams history and tradition. If indeed absence does make the heart grow fonder I cannot believe that I waited nine years between visits to a team, a city, and a field now in its 125th year of existence in Ft. Worth Texas.

Once a breeding ground for some of the greatest Brooklyn Dodger players of the 40s and 50s and over 50 Hall Of Fame players who stopped by in Ft. Worth before the regular season would begin.

It is now home to the Ft. Worth Cats who play in an independent baseball league among other Texas Teams.

One month ago VP Karen Lucchesi (daughter of one time Ranger skipper Frank) made a phone call to ask how I felt about throwing out a 1st pitch. Learning more and more about Bucket Lists here is one thing I’ll never have to do again as I said yes. The irony of this is had I said no I would have been in San Antonio watching a third NBA Finals game. Everything happens for a reason.

Fathers Day 2013 was a busy one at LaGrave Field as over 3,500 Fathers and sons/daughters got to play catch in the outfield before the 6:00 start time with the McAllen Thunder. My arrival time was 5:40 with friends and family. It’s always an added bonus when you see the kids having fun with the game of baseball in itself.

As an added bonus we got to sit inside the Bobby Bragan Dugout suites. It seats up to eight people and has been around since 1926. Karen told me that home plate has been the exact same spot since 1915.

The Red Sox were winning World Series’ back then with Babe Ruth as a rookie hurler. Although growing up a Yankee fan I began to wonder what it was like back in the days of Jackie Robinson, Pee Wee Reese, Roy Campanella, Roger Hornsby and the like…

Barbara, Blair, Toscia, Harold and myself then sat back for an afternoon/evening of minor league baseball-a waiter came by to provide food and drinks-as Ft. Worth and McAllen played a three hour game won by the Thunder.

An early Cats 4-1 lead fell to a 7-5 defeat with a rocky 7th inning. The crowd of 3,339 didn’t seem to mind as it was after all a holiday and to be able to sit next to the ballplayers kind of a cool deal!

Dodger the Mascot also came by for a photo op and so did some of the Cats players to appease the Sisters from Stephenville. If you have never seen a game of baseball at classic LaGrave Field be sure to put this on your Bucket List.

Back in 2004 I actually purchased a Cats cap and tee shirt which I have kept over the years. The staff was awesome and the players equally down to earth. If you have any questions about watching Ft. Worth Cats baseball give my friend Karen Lucchesi. You can also go to www.fwcats.com for more information.

In a week where I got to watch the NBA Finals in person, throwing out a 1st pitch game isn’t too bad of a way to finish out a week. Equal thanks to Harold and the girls for coming out and hanging out with the man who was conceived on Fathers Day 1963 (smile). 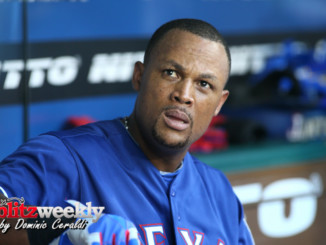