Created from the mind and liver of NOFX‘s frontman Fat Mike—and named for NOFX‘s classic Punk In Drublic album—the Punk In Drublic Craft Beer & Music Festival features the best in punk rock music and regional craft beer. In 2017, the touring festival hosted nearly 50,000 punk rock and craft beer fans in total over its six dates in the Western U.S. 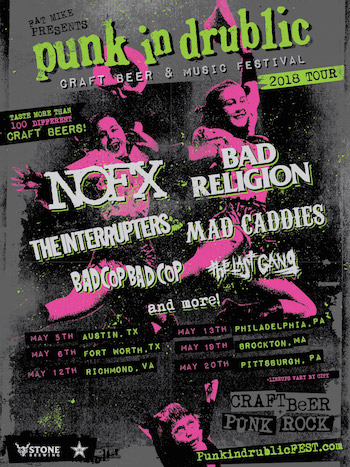 Fat Mike said, “I don’t get excited about a lot of things…but when I get a chance to do a Central Southern Mid Eastern West Northern Tour…I just get confused. Sometimes confusion can be exciting though.”

Festival co-producer Cameron Collins of Brew Ha Ha Productions explains, “What makes Punk In Drublic so special is the authenticity of it. Craft beer, true craft beer, from local and regional breweries who are running their businesses with the same mentality as punk rock music: independent, often times controversial, and without a care in the world about how it’s ‘been done in the past.’ I say it all the time, punk rock is the music much of the craft beer we drink is brewed to…it’s appropriate to have an epic event that celebrates the two!”

“After the riotous success of last year’s ruckus, we were all-in for the 2018 Punk In Drublic Craft Beer & Music Festival,” said Greg Koch, Stone Brewing executive chairman & co-founder. “Before we started with this nonsense more than a year ago, Fat Mike initially claimed not to care what we showed up with, so long as the beer we showed up with was wet. That’s not our style, as we’re as hard core about beer as he is about punk music. Committed to get on the ride and see what it was all about, he arrived at our brewery in pink boots and seriously got in on the action. In the end, we brewed a hoppy lager that’s core, punk and perfect for post-slamdance. All in all we were all pretty damn happy with what we created. No doubt, the guy has some of the most serious cred that exists when it comes to independent punk rock, and now he’s got that crossing over to independent craft beer.”

This year the Punk In Drublic Craft Beer Music Festival crawls into Fort Worth on May 6th, with tickets going on sale this Friday, March 2nd.

During VIP early entry tastings (from Noon-4:00 PM), and general admission tastings (from 1:00 PM-4:00 PM), craft beer lovers that are 21+ can choose from over 100 craft beers from dozens of top breweries. In addition to Stone Brewing, some of the participating breweries include national breweries such as: Bell’s, Deschutes, Odell’s, Oskar Blues, and Sierra Nevada, as well as local breweries, such as Alewerks in Richmond, Yards in Philadelphia, Adelbert’s in Austin, Down the Road in Brockton plus many more local and national breweries. Breweries vary by market.

Punk In Drublic Craft Beer & Music Festival General Admission and VIP ticket options will be available for purchase. All tickets include craft beer tasting and access to view the music stage for attendees 21 years or older.

General Admission tickets start at $39.50 (plus fees). VIP Tickets are $99.50 (plus fees) and include: one VIP admission ticket to Punk In Drublic, a dedicated VIP entry lane into venue, and one hour early entry for craft beer tastings (for those 21+), starting at 12:00 PM. VIP ticketholders also receive access to the Very. Unimportant. Person. Lounge, with: 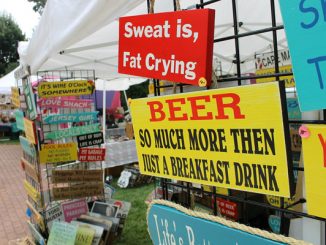 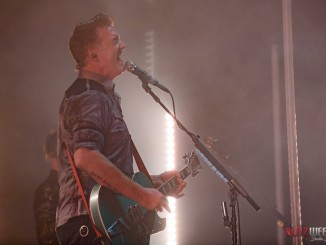 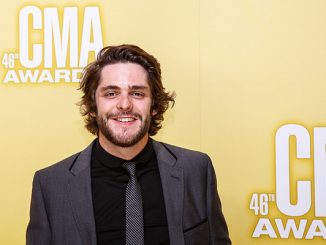