The Dallas Cowboys fell to 0-3 by virtue of a strong second half by the Miami Dolphins 25-20.

The game that is viewed as your ‘dress rehearsal’. One to gauge how your team is going to do when the regular season begins.

Starters on the field in the first half and the expectation that there is an element of cohesion when handling and defending against the ball.

The one area of the Dallas Cowboys that I was very high on-the offensive line-did a proverbial belly flop in Florida for its quarterback.

Four times the Dolphins got into Tony Romo’s grill. Three times Romo got sacked (twice by Cameron Wake). Tony was able to connect on ten of eighteen passing for 118 yards. 32 of those yards scooped up by Dez Bryant.

“It was good to see Tony out there playing. He got knocked around a little bit, and that could be good and bad,” said Jason Garrett. “You want the protection to be clean, but at the same time for him, in his preparation for San Francisco, it’s good to have him feel the physical part of the game. There were some good things and some things we have to work on.”

In the space of five first half possessions the Cowboys were able to muster up 110 yards of offense. 32 total plays in which the hero of the first half was Dan Bailey by virtue of two field goals of 50 and 52 yards. This makes three field goals made by Bailey of 50 yards or more. He hit a 53-yarder last week against the Ravens.

Ironically the Miami Dolphins would get the win despite having the availability of a place kicker.

“I thought the offense did not get into a great rhythm, but there were some positive things both in the run game and the pass game,” Garrett said. “We had ourselves moving backwards a little bit with some penalties.”

The second was when all of the touchdowns came to pass. Ryan Tannehill played for one drive in the 3rd quarter in addition to all of the first half. Tannehill was a workmanlike 13 for 21 for 119 yards with an interception.

The pick marked the first time in 41 throws that Tannehill found the wrong man, negating a scoring chance.

The score became 11-6 when Miami completed a 5 play 71 yard drive highlighted by a 54-yard pass from Matt Moore and a two point conversion.

It took the Cowboys all of three and a haf minutes to move the pigksin 74 yards when Brandon Weeden (5 of 9 for 77 yards) found LaRon Byrd in the end zone for a 27-yard touchdown and a 13-11 lead.

Tyler Patmon-one of the few highlights in the second half for the Dallas Cowboys increased the lead to 20-11 when picking off a pass from Matt Moore for a nine yard touchdown and a 20-11 lead.

Gator Hoskins would narrow the margin to 20-19 when he caught a 27-yard pass from Matt Moore and a successful two point conversion. A drive that took all of five plays and 89 yards.

Miami would finish out the scoring with a 12 play 55 yard drive culminating in a 1-yard score by Orleans Darkwa for a 25-20 lead… and win.

Brandon Weeden went 5-9 for 55 yards while Dustin Vaughn went 1 for 6 in late game check-in. Matt Moore went 12 for 19 for 172 yards, no doubt bringing back memories of Thanksgiving Day 2011 when these two teams met.

It can be safely assumed that Tyler Patmon has earned himself a spot on the roster. As for Thursday night’s finale one wonders whether or not any of the offensive linemen see any playtime to offset what wasn’t working Saturday night in Miami.

While there will be numerous opinions on seeing your starting quarterback get tackled three times in a half we leave the final word on Tony Romo from his top receiver.

“Tony, he’s a true competitor, for real, man,” Dez Bryant said. “That’s what a lot of people don’t know. He wants it. He wants to be in. He fought to stay in on the drive that I came out. I came out of the drive, I was hot and pissed. We only had three (points) up there. I understood, preseason, but somehow, someway, they let him go in. That’s what I’m talking about.”

If this game is any indication of what’s to come in 2014 then suffice to say Dan Bailey will need to stay healthy and mobile.

September 7th it starts for real. For better or for worse.

The Best of Sports’ Worst Fans 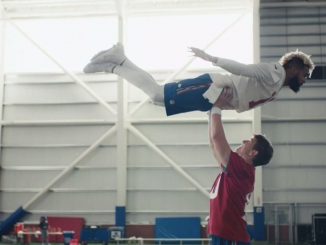