The eight-team, single-entity structured league will feature high-quality professional football and forge a dynamic alliance between fans, players and the game. Fans will be able to stream Alliance matchups live via the free Alliance app, in a first for professional football while also accessing integrated fantasy options with real rewards — for themselves and the players they are cheering on. Television partner CBS will air Alliance matchups, beginning with the season opener and culminating with the championship game on the weekend of April 26-28, 2019, with a regular-season game airing each week exclusively on CBS Sports Network.

“Players have our commitment that we will seek the highest degree of safety and our support as we continue to invest in their success off the field with post-football career scholarships and financial wellness programs,” Ebersol added. “With the expertise of Bill Polian and a leadership team of respected former All-Pro players and executives, we are committed to putting the best football product possible on the field every weekend, ensuring that 2018 will be the final year fans have to experience a six-month period without football.”

With a lineup of key investors that includes Founders Fund, Slow Ventures, The Chernin Group, Adrian Fenty and Charles King’s M Ventures, Keith Rabois and former All-Pro Jared Allen, The Alliance will bring a new business model to the forefront of professional sports.

Real, High-Quality Professional Football
The Alliance will feature eight teams with 50-player rosters, built primarily through regionally based allocation in the fall. Players will be available in markets near where they played in the NFL or college. Eight Alliance cities and their respective coaches will be announced in their local markets over the next 12 weeks.

“There is a significant amount of football talent looking to begin or extend their professional careers. The Alliance will provide those players with a new opportunity to compete at a high level,” said Bill Polian, co-founder of The Alliance of American Football. “Our players and fans are the lifeblood of The Alliance, and we will treat them as such.”

“We will give players an opportunity to flourish on the field while establishing plans to support their personal and professional growth, health, safety and financial well-being,” Polian added. “This is our commitment to them and will result in an exciting pro football product on the field that fans across the nation and in our markets can rally around.”

The Alliance will introduce several rule changes designed to enhance excitement, increase the safety and accelerate the pace and tempo of games, while maintaining the integrity of the sport that millions of people around the world love:

CBS Adds The Alliance to Sports Lineup
CBS Sports and CBS Sports Network will air Alliance matchups throughout the season.

“As the Alliance of American Football launches next February we are excited to become the official television partner, adding more football to our robust programming line-up with a great package that includes two primetime games on CBS, as well as a full slate of regular-season spring football on CBS Sports Network,” said Sean McManus, Chairman, CBS Sports. “With Charlie Ebersol and Bill Polian at the helm we are confident that the product they will deliver will be entertaining, exciting, engaging and something that fans will really enjoy.

Free to Watch & Fun to Play
The Alliance is committed to providing the ultimate fan viewing experience, connecting them with the game like never before. Fans will be able to stream Alliance matchups live via the free Alliance app and family pricing will result in a more affordable in-stadium experience.

The Alliance views fans as first-class partners and will empower them with an unprecedented level of participation in the success of their favorite teams and players. For the first time in American professional sports history, fans will have the option to play interactive fantasy with real rewards while they watch.

Emphasis on the Player Well-being on and off the Field
The Alliance will invest in each and every player on the field through a commitment to provide state-of-the-art equipment, rules and medical/training procedures and will provide ample opportunities for personal and professional growth off the field.

“I was fortunate to live my dream of playing professional football for 12 years and I am eager to use my experience to help shape The Alliance in a way that will create the best possible environment for players,” said Alliance investor Jared Allen. “As a former player, The Alliance’s emphasis on player well-being on and off the field is something I’m proud to be a part of.”

“Beyond that, as a fan of the sport, I’m looking forward to having football in the spring. The Alliance will provide unique opportunities to players who are still pursuing their dream, looking for a second chance to showcase their talents or aiming to extend their careers.”

Accomplished Leadership Team in Place for Launch
For more than a year, an accomplished leadership team has collaborated to develop the unique vision of The Alliance. This includes its founder, Charlie Ebersol. Growing up along the sidelines of professional sports, Ebersol has built a career on telling the stories behind the sport. He is a film and television producer, director, and philanthropist. Ebersol has created hit shows, sold franchise film properties, and launched companies and foundations with global brands and personalities. His credits include: “This Was the XFL” (ESPN ’30 for 30′), critically-acclaimed “NFL Characters Unite” (USA), “The Profit” (CNBC), “The Moment” (USA), “Rooster and Butch” (A&E), “Strike Team” (ESPN Films), “Gold Medal Families” (Lifetime), “West Texas Investors Club” (CNBC), “The Wanted” (NBC),” documentaries “Don’t Look Down” and “Ithuteng: Never Stop Learning.”

Designing the football program for The Alliance is one of the most successful executives in the history of the game, co-founder Bill Polian. In 24 years as general manager, Polian built multiple championship teams, including the Buffalo Bills, Indianapolis Colts and Carolina Panthers, which collectively made eight conference championship and five Super Bowl appearances under his leadership. Polian is the first six-time recipient of the NFL Executive of the Year award and was enshrined in the Pro Football Hall of Fame in 2015.

JK McKay, who has been around the game of football his whole life as a player and executive, will head up football operations for The Alliance. A 1975 graduate of the University of Southern California, McKay played on two national championship football teams (1972, 1974) and in three Rose Bowls (1973, 1974, and 1975). After three seasons in the NFL, McKay became a successful attorney, Vice President & General Manager of the XFL’s first and only championship team, the Los Angeles Xtreme, and Senior Associate Athletic Director at USC, where he navigated the school through potentially crippling sanctions.

Legendary media executive and producer Dick Ebersol, will serve on the board of directors for The Alliance. Dick Ebersol is one of the most influential figures in sports television history, defining NBC Sports’ programming for over two decades and creating Sunday Night Football. As chairman of NBC Sports, Dick Ebersol pioneered NBC’s Olympic broadcast. His influence extended beyond sports, co-creating the iconic NBC late-night show “Saturday Night Live.”

Joining the Player Engagement Board of Advisors is two-time Super Bowl champion Justin Tuck. Tuck is best known for delivering clutch, memorable performances on football’s biggest stage during his impressive 11-year career. In nine seasons with the New York Giants, Tuck recorded 18 forced fumbles and 60.5 sacks, placing him 6th all-time on the Giants’ sack list. As captain of one of the most formidable defenses in NFL history, Tuck was never one to shy away from a challenge.

Tuck is currently enrolled in the MBA program at the Wharton School of Business in Philadelphia, PA and continues to expand his philanthropic work focusing on providing positive opportunities for today’s youth. In 2008, he and his wife created Tuck’s R.U.S.H for Literacy in an effort to bring the same opportunities that made them successful to low-income youth in New York, New Jersey and Alabama. He joins The Alliance in an advisory role, leveraging his football acumen and unique player insight to help shape policies that are in the best interest of the players, fans and game.

Jared Allen, Troy Polamalu and Hines Ward will serve as player relations executives with The Alliance, bringing a combined 38 years of professional football experience to the league. Allen spent six of his 12 seasons in Minnesota, where he was a Pro Bowl selection five times and led the team to a conference championship berth. Allen was a first-team All-Pro four times and led the league in sacks twice. In 2012, he set the franchise record for sacks in a single season with 22, just a half sack short of the NFL record. Allen was named to the 50 Greatest Vikings list in 2010.

Polamalu spent his entire 12-year career with Pittsburgh, winning two Super Bowls and earning eight Pro Bowl selections. His memorable 2005 season resulted in a first-team All-Pro nomination and the first of his two Super Bowl titles. In 2010, Polamalu’s play elevated the Steelers to the best scoring defense in the league and earned him the AP Defensive Player of the Year award. Polamalu is a consummate professional and leader who understands the power of education as he used his time during the 2011 lockout to complete his degree in history from USC.

Over the course of a storied 14-year NFL career, Ward proved to be one of the most resilient, reliable, physical and competitive wide receivers in league history. A two-time Super Bowl winner and Super Bowl MVP, Ward spent his entire career with the Pittsburgh Steelers, becoming the team’s all-time leader in receptions, receiving yards and receiving touchdowns. He was a four-time Pro Bowl WR and from the league in 2012. He is still just one of just two players in league history with at least 1,000 receptions and two Super Bowl rings.

For more information and to sign up for news updates, visit AAF.COM. 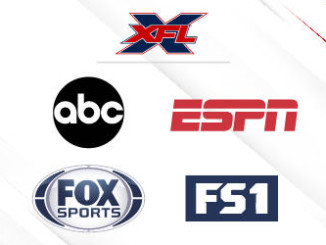 XFL to air on ABC, ESPN, FOX Sports and FS1